I'm someone who values a good pair of headphones. My ear isn't discerning enough to really count myself as an audiophile, but I listen to a lot of music and in the office (remember that?) I was fairly reliant on active noise cancellation to get work done.

My current pair of headphones is the pretty premium Bowers and Wilkins PX, picked up 3 years ago during a Boxing Day sale. They've done well in those three years, but had to be replaced after the arms snapped after a flight (in part due to the flimsy travel case) and the replacements I received in 2019 have recently started to give me the occasional light electric shock in the left ear.

I eagerly anticipated Apple's rumoured over-ear ANC headphones when the rumours first emerged but was a bit shocked by the sticker price. Still, in needing a new pair I wanted to rule them out so ordered a pair to try on in store (with Apple's fiddly, but mostly justified, covid precautions you can't just turn up to their stores currently). Unfortunately I couldn't try them in store so walked away with a significant dent to my bank balance and a 14 day evaluation period.

As someone with another pair of H1 earphones I had a few preconceptions:

As above, I'm not an expert in these matters, this is just some brief thoughts on my experience. Overall the sound quality did impress me after they had bed in for 10-15hours. Switching back-and-forth between the Max and my old PXs I definitely preferred the audio of the Max, it definitely had a degree more clarity in most circumstances, if the mid range sometimes wasn't as pronounced as I'd have liked.

With that said, when not directly trying to compare I didn't really come away thinking that the Max sound £200 better than the PX when listening to the Max for longer periods.

I also wasn't entirely convinced that the Dolby Atmos support added much to the headphones. It's limited entirely to iPad and iOS devices and even then dialogue sounds a little compressed. Action sequences do sound quite fun, but the bits in between degraded the experience overall for me. An option that's nice to have, but for me didn't provide any real improvement to the headphones.

Hard to judge while stuck at home, but it does seem very good. I tried playing the radio through my PC speakers and it suppressed it brilliantly and it also coped with the New Year's fireworks impressively well. Transparency mode is also remarkable in the clarity and natural impression it provides.

With my PX and PowerBeats Pro I've become quite used to wireless bluetooth audio usually being fairly unremarkable. The PXs sometimes can be a bit fiddly with multiple devices, but generally are reliable. The PowerBeats Pro asides from sometimes not waking when removing from the case (requiring a lot of exaggerated replacing and retrieval to ensure the case contacts are engaged) have been completely solid, whether with Mac, iPhone, iPad, Apple TV, Apple Watch, or PC.

The AirPods Max however, have been comparatively useless. Each time I've worn them there's at some point been some period of intermittent connection with audio stuttering, using both iPhone and iPad. Pairing them was entirely effortless, but using them can be a nuisance. It may be that I ended up with a faulty pair,1 but it's definitely not something you'd expect given Apple's proprietary experience with AirPods.

The AirPods Max are magnificent to see and to hold. The construction is incredibly solid, I think you'd struggle to snap the arms or any other section of them.

It's not all good, however. The fit caused by the distinctive design was the deciding factor in why I returned my pair. The clever ball joint at the top of the earcup that connects the headband is a bit of an own-goal. It's very nice to look at and satisfying to adjust, however it also (for my head) makes it an incredibly uncomfortable fit. 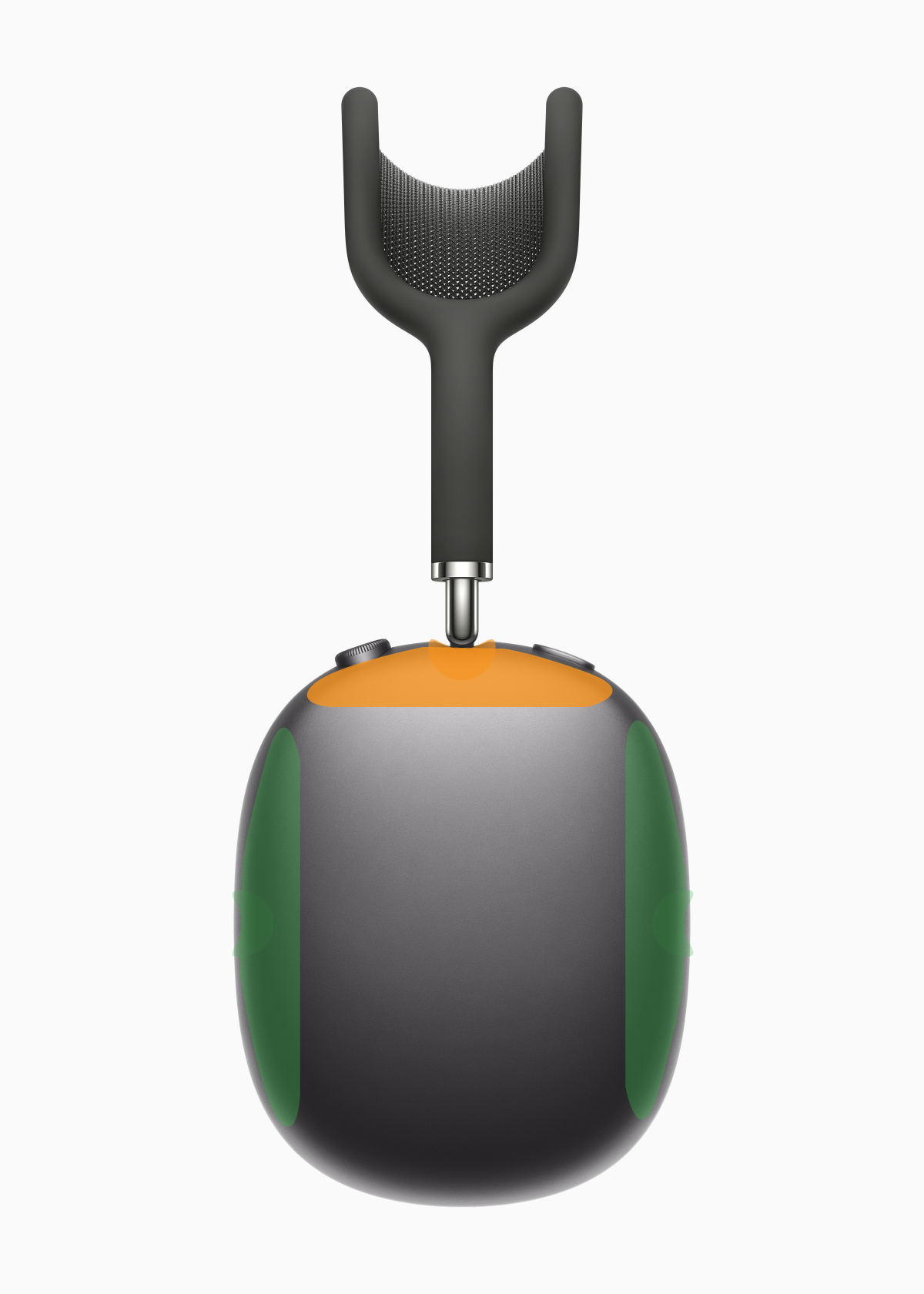 Most headphones have their hinges in the area highlighted in green, either on one side or across both, distributing the weight across a much larger area. I do wonder whether aesthetics were the deciding factor in choosing this design, because regardless of how I adjusted the arms and headband, the discomfort never went away (even if the headband itself was comfortable).

Apple tend to make decisions that are particular in how they can deviate from convention in established minor details. Sometimes it can be innovative and excellent, others just frustrating.

With the carrying case, it's frustrating and baffling. The AirPods Max are extremely solid in construction, but the aluminium chassis of the cups will dent and scratch easily and the headband arrived with marks already cut into the inside of the rubberised frame. Realistically a separate case is required for any sort of protection if they're to be transported anywhere in a filled bag.

Equally frustrating are the lack of 3.5mm jack (and omission of adaptor cable - instead a £35 accessory) and the use of lightning to charge. None of these things would be dealbreakers, just detractions that could reasonably put people off the price tag.

The AirPods Max are a brilliant sounding pair of headphones that fall short in the areas you'd expect Apple to absolutely nail. The sound is extremely enjoyable and the noise cancellation is miles ahead of my B&W pair. If the comfort and wireless performance were solid, the price would not be unreasonable for me (even if towards the limit).

I hope that a second generation can resolve the fit flaws, if they do I might upgrade then as the Max are impressive, just not very usable.